One of my goals this year was based on running.  I had competed in the Percy Pud 10k twice before in 2013 and 2014 getting progressively closer to the ‘sub-40’ so, can you guess it..?  My goal this year was to go sub 40 minutes in the only 10k running race I have ever competed in.  It’s been my best year for running and I have already run twice the 2014 distance record of 367km and notched up a little over 800km.  This has included a half marathon, a few fell races, 2 OMM lites, the OMM and several more parkruns but also more fell running in general as training.  The goal always seemed achievable but I knew it needed some additional and specific training, a race day strategy and a lot of determination.

When the day came I felt woefully under prepared.  After picking up an ankle injury during the OMM I was unable to run for the first two weeks of November.  This left me with the race day strategy and determination to fall back on.  The strategy was to find the 40 minute pacer and stick to his shoulder like glue until about 6km and then move away from him.  This was all working fine until about 8km when I could really feel the lack of preparation knowing away at my tired legs.  With only 500 metres to go the 40min pacer over-took me at, what felt like, the speed of a bullet.  I realised that this is where the determination now took over and quickly adapted my pace to overtake him.  The last 500m of the Percy Pud are up a relentless incline and I could see the timer already on 39mins counting inevitably onwards.  My legs were completely destroyed by this stage and my breath was coming in hurried and giant gasps.  The 40min pacer started to shout “last 30 seconds—-head up—-go for it” and ordered me over the line.

I made it with a gun time of 39:59 and a chip time of 39:53.  The relief and the reward were instantaneous and welcome beyond anything else at that moment.

Now I still need to complete a parkrun in sub 19 which I hope is still achievable this year.

This pretty much captures my thoughts on the matter of disc brakes on road bikes. I will accept, because I’ve been told often enough by people who MTB, that they have revolutionised mountain biking but this is road biking we’re talking about.

Cycling in the South Bay

The UCI Rules Committee announced that professional teams will be allowed to use disc brakes in all races for 2016. “We think this will help cyclists at all levels spend more money,” said committee chairman Snookie van der Sluit in a press release.

“There is a significant need for disc brakes among manufacturers, wholesalers, and retailers in every market segment,” said van der Sluit. “And disc brakes allow them to meet the need for more customer expenditures, which is a key component in making cycling even less affordable as a sport or recreational activity while simultaneously accelerating the twin trends of planned obsolescence and product incompatibility.”

Reactions in the cycling world were generally positive. “I don’t give two fucks what we ride, all my shit’s free,” said Fabian Cancellara when asked about the rule change.

Sunday was the fantastic Peak RC’s Cyclocross race in Sheffield at the Outdoor Activity Centre.  I mean that Peak RC is  fantastic and their race is also equally great, of course.

I was hoping to be riding on my newly acquired FMB Super Mud tyres but unfortunately my glue had gone off so I wasn’t able to get them on in time.  Instead, I was riding with some cheap-as-chips Continental Twisters which were surprisingly grippy in the testing terrain.  This new found grip did not stop me thinking I was going to die every time I went down hill or came across some mud but they were a lot better than the Schwalbe Racing Ralph tyres I have been using.  The Schwalbies are fine for general purpose but, for me, no good in the mud.  They simply don’t clear themselves.

I succumbed to peer pressure and entered the Senior race as an MV45.  This gave me 1 hour in the saddle which was, I thought, better value for money than the 40 mins for the vets.  It was hard but massively enjoyable despite the freezing cold, the slippery conditions and my lousy CX technique.  Still, it’s another race in the bag and great experience.

I’m still waiting for the official results to be corrected.  They put me 98th position but I actually came 70.  The results are here.

I am really grateful to Sam Taylor for this photograph.  It seems to really capture the day for me.

Thanks to the support and quality of the Open University I am now a graduate.  Not only does this qualify me for pretty much every job I’ve had in the last 20 years it also crowns the achievement of taking on the challenge in the first place.  It’s been a long, arduous and challenging journey but it has also been extremely rewarding.  The day was really special to share with Delia (my wife) and my parents, who probably never thought they would see me graduate.  It was made even more special by Martin Bean being present for the graduation ceremony.  Martin and I were closely involved in building the relationship between the Open University and Microsoft and it was partly because of this work and his inspiration that made me think this is something I should do.  It was a complete coincidence that Martin was being presented with an award by the OU on the same day as me.  It was fantastic to catch up with him and shake his had on the stage.

Here is my graduation photo as I met the Pro Chancellor.

It’s 800 metres of 7% climbing up to one of the best views in Sheffield. The club is hoping for around 30+ riders made up of club members, their partners and their kids. There is likely to be a few other riders from some Sheffield clubs.

Norfolk Park used to be the venue for circuit races for years with many local riders telling stories about which way round was harder. I remember seeing a stage of the Milk Race finish in the park during one of my PE lessons from All Saints School.

It’s great to be bringing racing back to the park and to introduce a new bunch of riders to a competitive event on a traffic free route. I’m hoping that some of the rider can get below 2 minutes on the course.

Here is the map of the course and the course profile courtesy of www.veloviewer.com

I’m getting ready for the Maratona 2015 edition.  The legs are in good condition and I only have one race between now and when I go plus two running races.  I’ll have to be careful that the running doesn’t undo the condition of my cycling legs.

The Maratona is the perfect excuse to get back to the Dolomites which is an area on a par with the Peak District but with arguably more impressive views.  The Peak just wins because of its proximity to my house.

Here is the VeloViewer image of the event

A fantastic night for racing. Here are some photos of the races.

It’s safe to say that this was a successful event for everyone and especially the organisers.  It was part of the North Midlands Time Trial series which is organised by Mark Bridgman Smith.  It turns out that I first met Mark more than 20 years ago when we were both actively involved in the climbing scene and frequently climbed together.  I’m glad I made a point of going and saying thank you to him because otherwise I’d perhaps never have realised.

For the record, I opted for a traditional bike with no tri-bars and no pointy helmet.  Keeping it simple sacrificed some time but it gives me a better idea of my performance.  I was riding as number 62, just 1 minute behind my friend James Baillie and with Pierre and Luc from Common Lane Occasionals riding as 63 and 64 respectively.

The night itself was just perfect.  The sun was shining and there was a slight east wind which helped to keep the night pleasantly cool for riding.  The wind gave a slight help from the start to the bottom of Fox Lane.  Fox Lane itself was steep and fierce and came just as the heart rate and pace had got up to a proper testing  level.  With two ramps and a long steady final rise to Shilito Woods it was then time to tuck in for the long descent to Baslow.  I decided to ease off the pedalling here thinking I had gone too hard up the hill.  Not sure if this was the best move or not but it helped recovery.

As I approached the Baslow junction I saw James Baillie (number 61) already on his way up the hill.  He didn’t look like he was slowing down for me to catch him and I didn’t.  The climb back up to Owler Bar is very familiar to me and one that I know I can easily go too hard on at the bottom.  Using my power meter I made sure I kept the throttle at around the 300-320 W level and this left enough to reach the flat without burning too many matches.  Once I was on the flat I knew that it was just a case of keeping my head down and powering through to the finish.  All I could think was that number 65 was going to be hot on my wheels but at the finish he told me that whilst his TT bike is awesome on the descent and flat it can be awkward to climb on.  So I remained un-caught as I crossed the line at 37:58.  This was 2 minutes ahead of my goal time and put me in 16th overall.

Altogether, a fantastic night out.  Well done to all who competed and to the organisers.  Brilliant course and I can’t wait until next year.

I’m competing in this tonight and the weather is looking fantastic.  Thanks to @bandcc for hosting this.

Here’s the link to the event

I’ll be racing in www.veloviewer.com kit and not Sheffield Sports CC although this is the best pic I have of me in a TT. 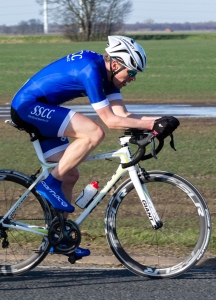